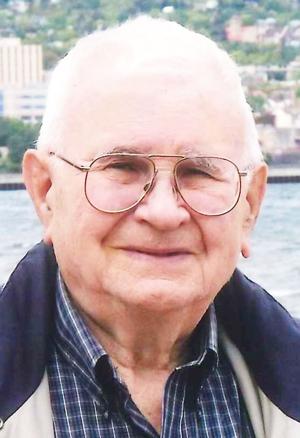 Donald was born on Nov. 17, 1929, in Sioux City, to Joseph and Susan (Weis) Kramper. He attended schools in Dakota City, University of Nebraska in Lincoln, Neb., National Business Training in Sioux City, Community College in Santa Monica, Calif., and Air Force Electronic and Radar at Lawry A.F.B. in Denver, Colo.

Don married Dolores Barrett of Sioux City on June 18, 1955. They had four children, Karen/Rex of Duluth, Minn., Nancy/Glenn of Sioux City, Brian/Mindy of South Sioux City, and Allen/Laurie of St. Charles, Iowa. They had eight grandchildren and five great-grandchildren. He had three brothers, Vincent/Dorothy, Neal, and Leo/Evonne, and one sister, Dorothy/Keith Chapin. All are survivors.

Don was a lifelong farmer near Dakota City. He also had part-time jobs with Ruan Transport and Arrow Stage Line.

He was a member of St. Michael’s Catholic Church, Knights of Columbus, Farm Bureau, 4-H leader, Nebraska Health Coordinating Council, Iowa Health Council, Sara Amateur Radio Assn. and Air Force Assn. His favorite hobbies were traveling, talking to people all over the country/world on Ham Radio, exchanging jokes/stories on the computer, and geocaching.

Don was preceded in death by his parents, Joe and Susie Kramper; his wife, Dolores Kramper; and a sister-in-law, Lorraine Kramper.

DECEMBER POOP..
Time moves on..  So, what’s new on the Loup.. Today, it’s snowing, looks like 3 – 4 inches, but I think that’s about all we’ll get, unless the wind decided to re arrange it..
A few days ago, the phone rang, Power Company says our power will be off in the morning from 9:30 til noon.. They have some maintenance to do..
Tomorrow happens to be the day LuEllen and her high school classmates have lunch.. I was in the shop (tomorrow) when she came in saying the garage door won’t open.. She had the problem figured out already, but I suggest she take the pickup, forgetting the shop may be hooked to the same power line as the garage.. Well, we went back and jerked the rope, released the chain, pulled the door up and she went off happy..
I spend alot of time in the shop persuing a metal working hobby.. My main work is making model cannons, most have been functional, but lately the paper weight models have prevailed.. The barrels range from, about 6 inches to 12 inches..
My old lathe caught fire recently and required about two big bills to replace parts in the power box, but we’re up and running again now..
Our son has moved back to Burwell and is still in the auto part sales but now at Napa in Ord.. He has always said he wouldn’t like to live here in the flat land, but a Burwell gal he’s known since high school and the fact they are both on Face Book seemed to enhance the address change for him..
Well, the nets seem to have moved into Winter  Mode and it could be a long Winter, so I hope our antennas survive the cold condx..  Until next month Merry Christmas  73  E&L